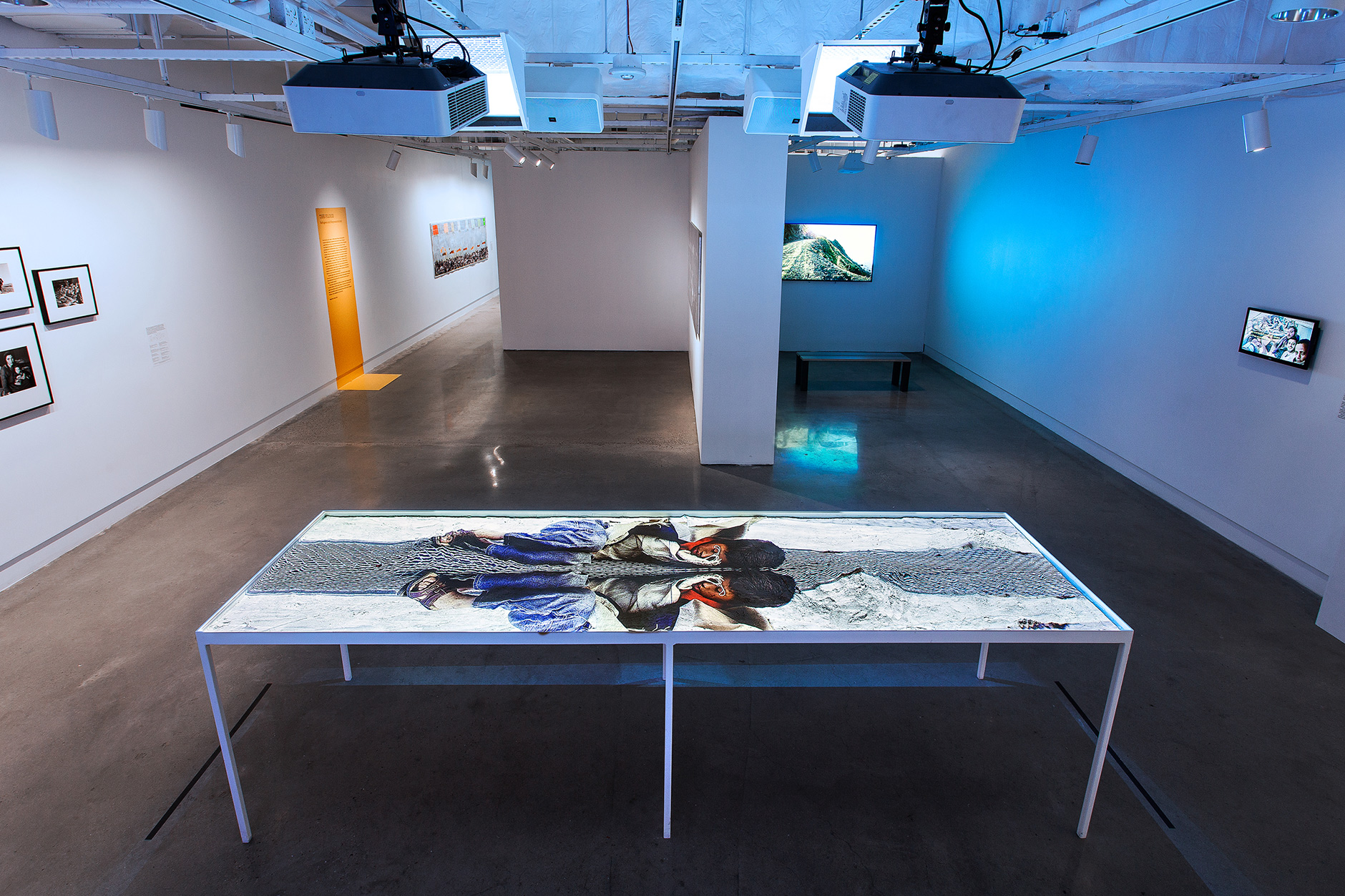 In an Information Age, when knowledge is networked and ubiquitous, how are truths discerned and histories recorded? In an era of ‘alternative facts,’ fast-circulating news, and “fake news,” the ability to understand our world — what constitutes real information to form knowledge and, ultimately, truths — seems daunting.

Rather than extract truths or call out fabrications, this exhibition presents multiple paradigms for information-making: experience and memory, the interview, the courtroom, the library, news media, broadcast, and social media. Together these works describe conditions for the speed and rhetoric of news and social media; our understanding of current events and writing truthful histories; and the manipulation of information, with attention to global conflict, the justice system, and international refugee and humanitarian crises.

Syed Hosain explores unfixed histories, traditions, and constructions, of Middle-East geography and his own Muslim identity through painting. Process and material driven, Hosain builds up rich surfaces on canvas creating a tension between recognition and obliteration. He also works into found surfaces, like old encyclopedias and history books, reworking images with additive and subtractive layers of paint, obscuring factual information and imagery to highlight multiple reading and meaning of text and image. Syed Hosain was born in Pakistan and lives and works in South Minneapolis.

Since moving from Quebec to New York in 1983, Perry Bard‘s work is fueled by observations of her immediate environment and their interpretations in a global context. The space between fact and fiction, the role of technology, the control of media, its proliferation in public space play out in installations and videos that she has presented internationally. Together with collaborator Richard Sullivan, Bard investigates the alliance of two siblings on either side of the Israeli-Palestine conflict and the absurdity and theater of Twitter.

Ilona Gaynor is a designer and filmmaker whose work draws upon the use of image, rhetoric and cinematic tropes, to construct complexly precise plots, schemes, and narrative texts. Using design as a vehicle, the work aims to manipulate, fantasize and drive forward the invisible, draconian reaches of political, economic, and technological progress and their topologies. The various outcomes presented, often take form as dense hypothetical plot constructions and narrative schematics, that maneuver between artifact, artifice, and representation.

For Essma Imady, being Syrian in today’s climate necessitates a politicized experience. She says, “Political art, at its best, asks questions rather than provides answers, it whispers rather then screams.” Imady asserts personal experiences in the face of the collective monolithic experiences of war and religion, using film, environments, and objects, to balance documentation of real, political trauma and layered narratives between her images and objects. Imady currently lives and works in the Twin Cities.

Hakan Topal’s interdisciplinary approach incorporates research that blurs the boundaries between art, technology, and social sciences, in an effort to cross-examine the historical and contemporary particularities of geopolitical contexts. By multiple informative layers subjects or situations, Topal brings visibility to their inherent incongruities and complexities.