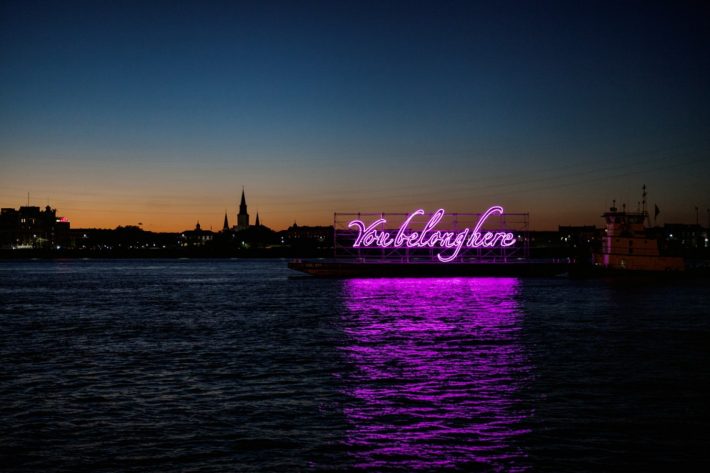 Artistic Responses to Natural Disasters: The Case of New Orleans

The second issue of MaHKUscript focuses on the current state of Spatial Practice. What concepts (such as territory, agency, agonistic negotiation, blurred boundaries, grassroots democracy, heterogeneity, cross-benching, participation, relational aesthetics, post-public environment, micro-urban tactics, etc.) are crucial in defining this field? Does the topical situation of thinking in terms of counter-space demand the developing of novel concepts? What role does artistic research actually play in the further articulation of critical spatial practice? Finally, what is the most strategic way to incorporate this new way of thinking and working in art education?

These are questions that cannot immediately be answered, but they invite further discussion and articulation. With this in mind MaHKUscript invited Markus Miessen (Berlin/University of Gothenburg) to deliver a keynote article. In his contribution “Crossbenching as a form of institutional Polity,” Miessen starts from the following proposition: to “do” spatial practice is to immerse oneself in a conflictual process of material production, equally including architects, artists, financiers, and builders. As a consequence, Markus Miessen argues, we have to eventually urgently reframe questions of—participatory—ethics and politics.

To test his ideas in a topical research-oriented art practice, Miessen interviewed Flaka Haliti (PhD Researcher Academy of Fine Arts Vienna). In this conversation concepts such as distance, separation, home and base are specified.

In addition MaHKUscript made an open call for authors to contribute to the proposed debate by responding to the above questions. This resulted in a multitude of reactions and inspiring perspectives.

For a start there are the incitements of new contextualisations and formulations of artistic strategies. In her article “The Radical Potential of Poetic Gestures” Tina Carlisi (Concordia University, Montreal) proposes to take up the 1960s thinking about utopian spaces anew. By means of poetic micro-actions—such as guerrilla gardening—the author envisions developing micro-utopias that, as “shared space” can offer resistance to techno-driven and neo-liberal understandings of public space.

Laura Gibellini (School of Visual Arts, New York) also explores the potentialities of topical strategies. In her article “Not Doing. On Unpredictability and Allowing Things to Happen” she describes how both Yvonne Rainer and Philippe Parreno develop choreographies of chaos in their respective art practices. In line with philosopher Quentin Meillassoux they disrupt any linear conception of space by proposing an undetermined becoming.

Other contributions question the role and position of the—mostly globalizing—logic of the biennial, in the light of the current spatial practice discussion. In his case study “Gentrify Everything: Looking for New Forms of Critical Artistic Agency” Pieter Vermeulen (Sint Lucas, Antwerp) describes the strategic method of the small-scale BORG biennial in Antwerp that focuses mainly on the context of its location. This demonstrates, Vermeulen states, a different form of agency that can contribute to criticizing the globalizing perspective that is advocated by the neo-liberal agenda.

Hakan Topal’s (Purchase College, SUNY, New York) “Artistic Responses to Natural Disasters: The Case of New Orleans” about the Prospect New Orleans Biennial can be understood from a similar perspective. This case study evaluates how this biennial format—at the time of hurricane Katrina—offered a subtle counterbalance to the way the media spectacularized natural disasters, by inviting the participating artists (such as Superflex and Paul Chan) to re-think life in New Orleans by using the power of imagination.

Finally there are contributions that focus on further defining Critical Spatial Practice. In her article “Critical Spatial Practice as Parrhesia” Jane Rendell (Bartlett, UCL, London) proposes a further articulation of the concept. She makes a strategic link to Foucault’s interpretation of Parrhesia: critical spatial practice as a self-reflective practice that starts from the perspective of “telling truth” and questions and transforms the social conditions into which it intervenes.

Such a spatial strategy could for example take the shape of de-essentialization. In “The Real Properties of Immovable Estates: Ambiguity and the Invention of the Coast,” Daniel Fernández Pascual (Centre for Research Architecture, Goldsmith’s College, London) uses the example of the development of Spanish coastal regions to show how the speculative mechanisms of real estate investments—and the circulation of capital—reclassify the natural environment in a way that creates a coastal ontology.

Critical Spatial Practice, as most of the articles in this publication clearly emphasize, continuously deconstructs the globalizing rhetoric of essentializaton by means of the dynamic perspective of transfrontier multiplicity. Such a perspective can be traced back to the transgressive potential of the historical silk road figure, concludes Mi You (Academy of Media Arts, Cologne) in her article “The Nomad, Space and Network of the Silk Roads”—a critical reflection on the eponymously named curatorial project she realized recently in the Asia Culture Center, Gwangju. Not only does it represent a maximized commodity flow, above all it represents a nomadic connectivity that contributes to a dynamic understanding of humanity’s self-awareness.