The Coalition Forces Are Pleased To See This Great Transformation

Spending time as a visiting artist is a privileged position, which allows a meaningful engagement with a complex spatial configuration. Prior to my arrival, I obviously had certain prejudices and expectations about the city of Bishkek. However I feel that having an assignment in hand and hearing introductory presentations by resident artists and organizers opened certain doors otherwise impossible to penetrate, thereby creating a salient guided perception into a new city enabling me to make a relatively healthy visual comparison with other locations that I visited over the past years. But I have to admit that two weeks is an extremely short period of time to come to serious conclusions about a place.

It seems to me that things are getting more and more homogenous across the globe. Anywhere you go, buildings, cars and market places, shopping malls, and advertisements look the same. The uncontrolled transformation to market economies, as opposed to general expectations does not yield to social/cultural diversity, functions like a unifying cylinder, taking all the differences and pushing them down to the level of the market, ready to be consumed at any given point. Through educational and cultural institutions, specific market logic is being spread without any significant challenges, design and localization is only a branch of this larger change. Within this schema, ‘high’ art and culture are set aside as luxury products for nouveau-riches, completely replaced by popular entertainment.

When this neo-liberal transformation takes place in a place where there is no possibility for democratic resistance, market rules becomes even more brutal, obey no external law, and changes the very fabric of society permanently (see Turkish society). Everything goes as far as you pay— sufficient bribery. Even through a quick observation in and out of Bishkek, you encounter many cases where police or other officials solicit money to solve “problems”. 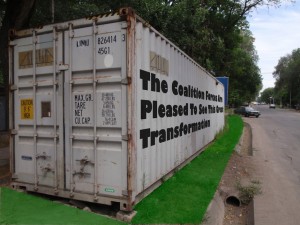 During the course of the symposium, we were expected to produce a “public art work” at a selected public site in Bishkek. My initial question was ‘how do we start at a new site without any given question in hand? Since there were no set theme for the event, the task of producing an artwork gets extremely open-ended. Furthermore, it is hard to know the political limits of artistic production in Kyrgyzstan. After all, you don’t want to put the organizers in danger after you depart the city. In a way, this was a productive challenge; the very limitation of utterance can be taken as a creative framework.My contribution to the Public Art Symposium included a vinyl wall text installed at the façade of the National Museum. In addition, I cleaned the two sections of front garden of the building and planted 400 orange flowers. 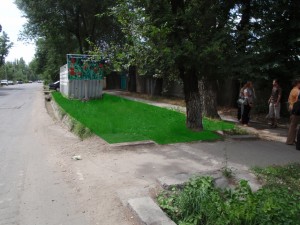 The museum’s façade directly looks toward the exit of the Hyatt Regency hotel, which provides the most expensive international accommodation, used by western businessman. The building site, like most of the Soviet buildings is not well taken care of, somewhat rundown yet it is used as a casual meeting area by young people, appropriated mostly by lovers. As a museum, it holds a nice collection mostly acquired between the 1950’s and 1980’s, composed of realist paintings depicts Asian work life. Today, museum administration rents museum spaces to artists and organizations. We were informed that Bishkek Art Center had to pay a sum in order to utilize their public sites.

a-The Great Transformation (1944) refers to a book by Hungarian economist Karl Polanyi who foresaw the devastating effects of market economy. Domination of market, therefore absolute commodification, yields an irreversible destruction of labor and land; it is an irretrievable alteration of livelihoods. When market rules override the ethical understanding of life, it yields a complete dissolution in society. Again see Turkish society as one of the worst example where religious neo-conservatism, a specific form of hypocrisy, breeds with an extremely polluted neo-liberal irrigation system.
b-The ‘great’ transformation that was happening around the museum initiated by various ‘western’ art institutions. For me it is important to note that the Public Art Symposium is supported by CES Arts Links, ArtHub, Open Society (Soros Foundation). At the same time, there was already a public sculpture (monument) installed in front of the museum and it was funded by Unesco, US Embassy, Soros foundation and a GSM company.
c-And the transformation that I realized in the gardens. Cleaning the planting many flowers was, in a way, a cynical alteration, an unfortunate modification of the museum site. The white on white texts and orange flowers were nearly invisible, immersed to the environment, provided no easy reading for the audience. It was an attempt destined to fail, like any artistic practice, provided no external justification other than presenting itself as the great transformation. 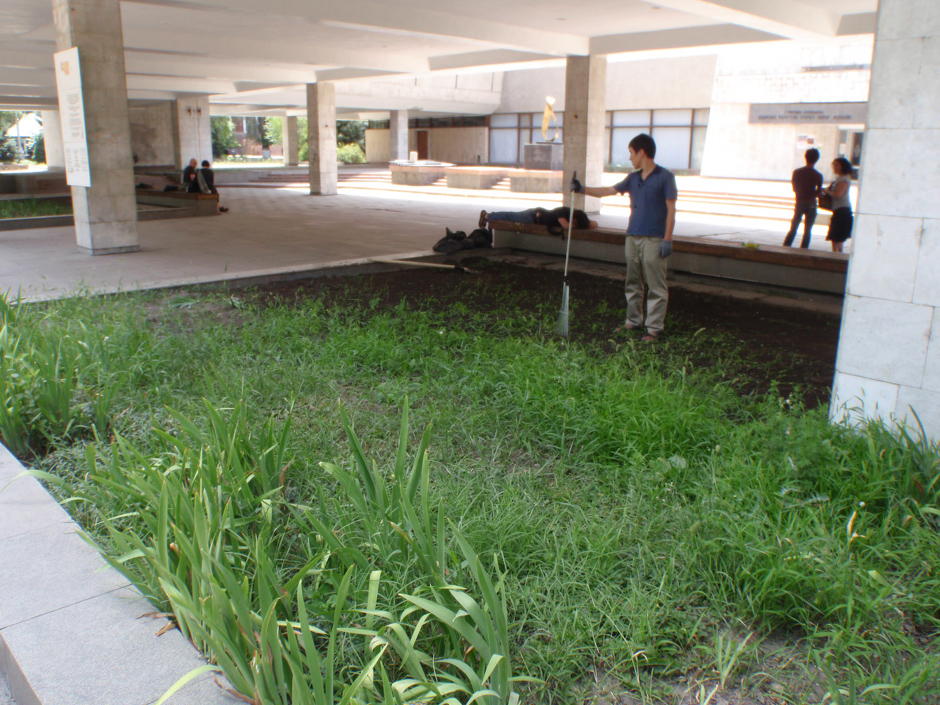 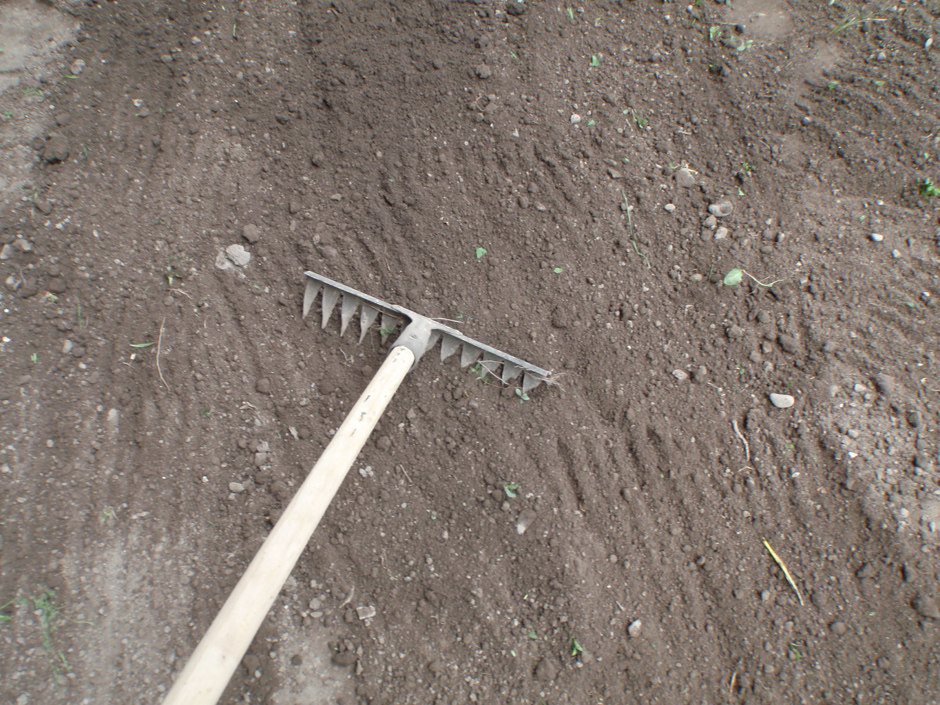 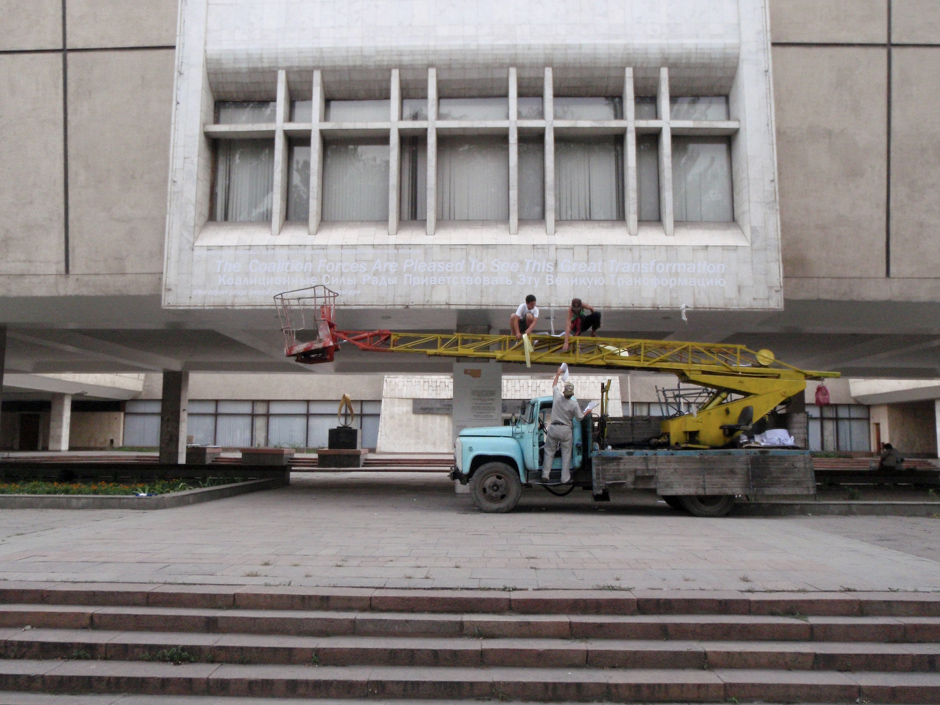 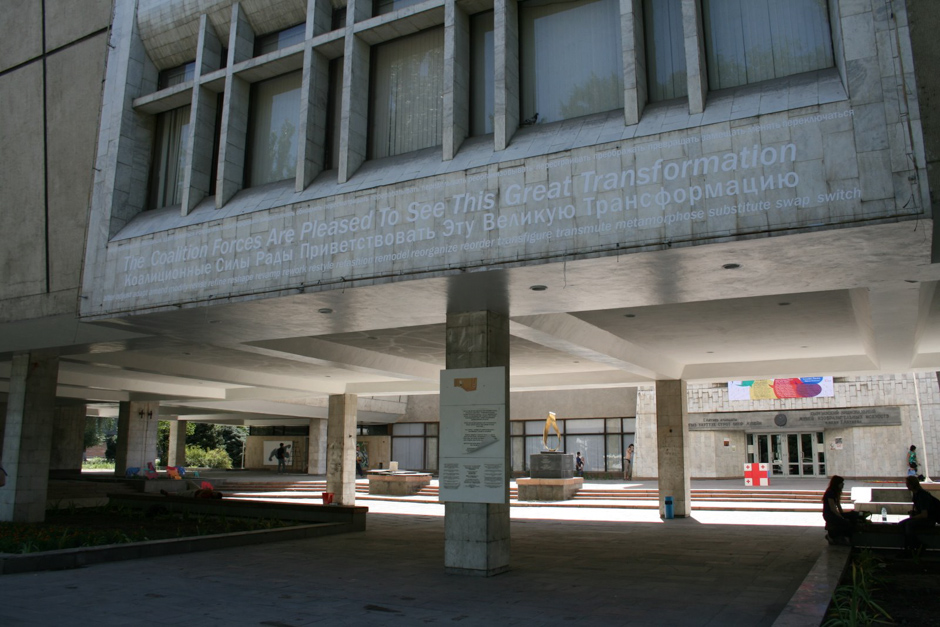 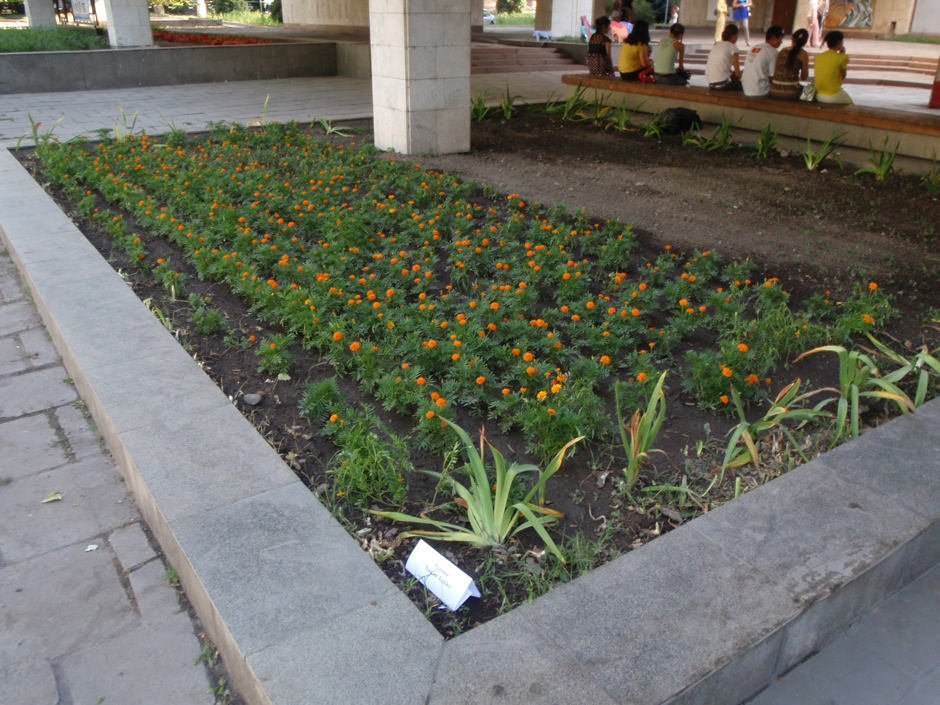 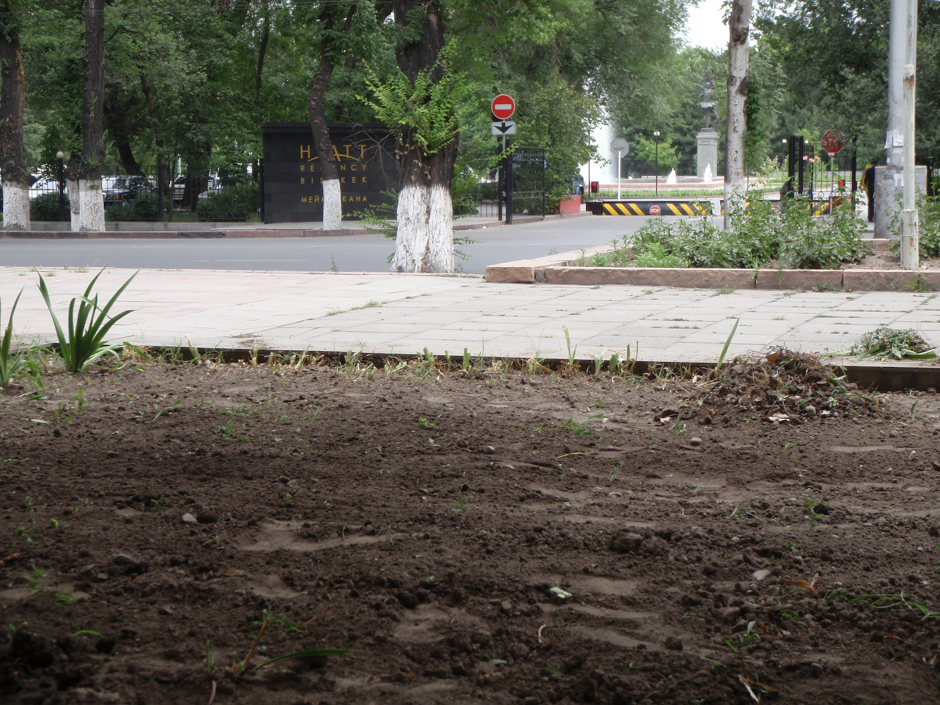 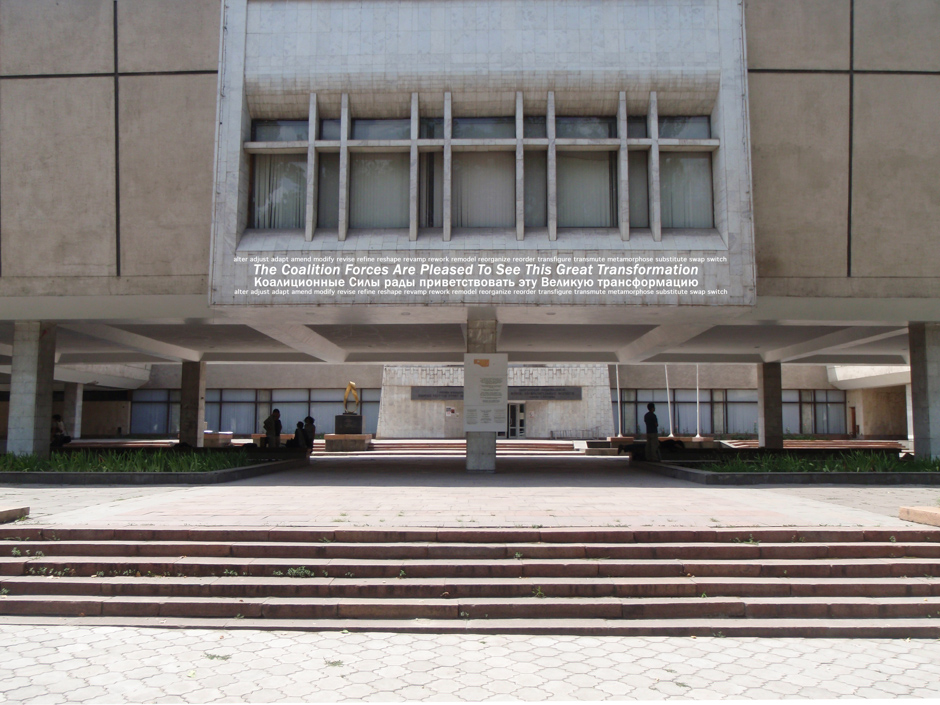